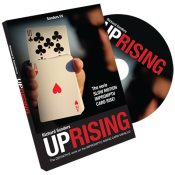 Learn three ways to make a card rise with no threads or magnets! Use coupon code UPRISING when added to a $100 order or more, and get it free!

Be sure to checkout UPRISING by Richard Sanders!
Click here for more info!

No points earned yet on current order.
Log in to see how many reward points you have already earned

Write a review on this product.

MJM its simple they are the best. This is the "go-to" site for any magician who likes to receive their products ASAP. Quick story: I...
Read More ->

I love your website. I order from it alot and I've become somewhat of a junkie. Expect to be seeing more orders from me. -Hayden
Read More ->

This was my first time ordering from this company but will definitely not be my last. Very great customer service from the minute I placed my order...
Read More ->